Victoria Beckham has tweeted a picture of her friend’s dog Harry wearing one of her dresses. But few pooches are pampered quite like those in New York, where indulgences can include spas and exotic fruits.

“New York is a wonderful place for dogs, so many services: pools, spas, dog runs,” says Beatrice Tosti di Valminuta. Kiki, her Chihuahua, sometimes pays a little visit to her Italian restaurant and wine bar in lower Manhattan where everybody knows him. Most of the time, though, Kiki attends doggie day care for small dogs. His real name is Killer Samson Hercules, because Beatrice who is Italian wanted a Chihuahua, and Julio, her Dominican husband, wanted a mastiff.

“We compromised on a Chihuahua with a mastiff name,” says Beatrice. 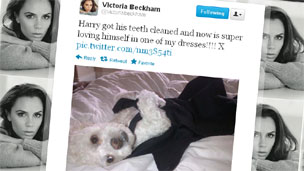 Kiki’s favorite treat is fruit, usually pears or watermelon. He wears specially made Italian cashmere when it’s cold. He is very well-travelled, and like all New York dogs likes an exotic vacation now and then.

In Naples one year, a restaurant said to Beatrice: “Madam you know you are very famous in Santa Lucia.”

She blushed and felt flattered, she says, until the man announced: “But not for you, for your dog.”

Sounds good to me. I am thinking of getting a dog. My friends think I’m too laughably urban, too peripatetic. But my extremely un-scientific survey has revealed that dogs love New York.

The Yorkshire terrier is top dog here, while Labradors and retrievers are high on the list. Me, I’m besotted with a pair of golden wheaten terriers I often meet when I go for coffee. In their curly silkiness, they remind me of my favourite person.

“They adore the city,” their owners tell me. “When we lived in the country, they ran wild. In our Soho loft, they are completely contented.” 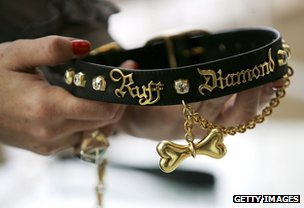 Diamonds are a dog’s best friend

Let it be said that my friends are not those obsessive New Yorkers who buy diamond-studded dog collars (two million and more), or take them to a shrink. In fact, Justine Haemmerli, my god-daughter, who with her husband, Kevin Rodricks, owns two cavalier king spaniels named Barley and Bruckner, strictly rejects the idea.

“What could a dog shrink possibly do?” she says. “I think that our dogs are incredibly emotionally stable because I run their lives like a Montessori teacher.”

For the depressed dog, Colleen Noonan thinks it’s often simply a question of style. In their chic Brooklyn apartment, she lives with her husband, Steven Wagner, and two delicious dachshunds.

“When my dachsund Jennifer Lopez was a puppy,” says Colleen, “I was convinced she was depressed as a result of being left alone all day while we were at work.

“She would mope and I got worried, so we bought a second dog – Leonard Cohen – thinking that this would help her overcome her loneliness. It turned out she wasn’t depressed, it was just her personality – melancholy and lazy. She’s happy watching TV.”

‘Just relax and clear your mind’

Like all good New York dog people, Colleen and Steven reject the wilder shores of dog fashion, but Colleen does order special sweaters for them.

“I’m having some made with a glass of wine on one and a steak on the other, so I can look at all my favourite things when we go out walking.”

To New Yorkers, there is no issue bigger than food so there is no reason dogs should feel otherwise.

“Barley and Bruckner are picky eaters,” says Justine Haemmerli. “Our vet told us that owning this breed is like having a perennial two-year old, which at once made me question whether I ever wanted to have children.

“They gobble up what we give them, then three days later look at us with such deep hurt and betrayal in their eyes that you’d think we were setting a bowl of syringes in front of them.”

This may no longer cut the mustard for your pooch

The food question is interesting, she says. “It seems to be a major fork in the road between the crazies and the I-don’t-cares. There’s Alpo and then there’s Blue Buffalo, which is supposed to make dogs coats silkier and their souls refined. Then there are the people who only feed their dogs home-cooked foods.

“I did this for a while until they decided my home-cooking wasn’t to their liking and I started to feel like a real nut. So now they eat a higher-end canned food, with twee names like, ‘Mediterranean feast’ and ‘Cowboy cookout’.”

Barley and Bruckner get loads of exercise. Justine and Kevin often take them out for hours in weekends, where they meet many other dogs. Many dog people, like Martha Teichner, walk their dogs with dog pals.

“The absolute sign of a New York dog person is that their coat pockets, even minks, are full of plastic bags,” says Teichner, the distinguished CBS correspondent and adoring dog person. She is also a considerable gourmand. Goose and Minnie, her bull terriers, are the quintessential New York dogs.

“They go for their early morning walk after their breakfasts. It’s often very difficult to get Minnie up. She prefers to luxuriate in bed. In really cold weather, they wear layers; sweaters, a fleece that covers their stomachs, then a puffer coat.

“After we’re home, we work our way through however many fruits I can find: oranges, apples, kiwis, papayas, pineapple, cherries, apricots, pears, peaches, mangoes (they love mangoes), melons.

“Then we end with dates. Later, after I’ve showered and dressed, I eat a piece of toast and feed them small shredded wheat and bran squares dipped in honey-roasted peanut butter.” 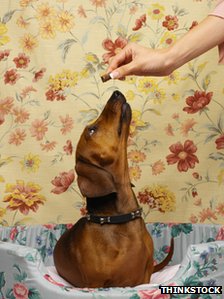 “Elk with your jerky stick, madam?”

If you ask me, it doesn’t get better than that, except on weekends, when they get a bit of cheese or a scone at the Union Square Greenmarket, or an elk jerky stick at the Barking Zoo. During the day, Minnie sleeps under Martha’s duvet, and Goose sleeps on the couch in the den.

On vacation, dachshunds Jennifer Lopez and Leonard Cohen prefer country inns to grander city hotels. Barley and Bruckner go to their aunt Laura and many canine cousins, including Phoebe Jane, in the Pennsylvania countryside.

As for Minnie and Goose, they often travel by pet-chauffeur taxi to Charleston where Martha has a second home. (Taking dogs on planes these days is a nightmare, all agree.)

Martha recalls: “On one occasion, a friend of a friend whose cousin is Jewish-turned-Buddhist had to fly to Texas to pick up several Tibetan Lamas who were visiting Austin.

“The pilot said he had to re-fuel somewhere, and said he’d drop me off in Charleston.

“Minnie sat in a leather seat looking out of the window of the plane. She was a rescue dog. From homeless dog on the verge of death to private jet. The change in circumstances did not escape her.”

Call it a New York tale.